I’m thrilled to have my research and artworks published in volume 3 of Refract, an open-access visual studies journal. My featured artist essay is entitled Traces, Fragments and Voids: An Artist Representing Detroit’s Vanishing Homeland and accompanies published images of my Homesickness Series. You can read and download the publication by visiting https://escholarship.org/uc/item/7m70b0hx and you can view my written and creative contributions to the issue by visiting https://escholarship.org/uc/item/2zf2p5tk. I’d like to thank the Refract editorial board for selecting my work and research for inclusion as well as their time and vision in transforming the piece.

About Hauntings and Traces
This volume of Refract investigates the power dynamics of (in)visibility through “haunting” and the “trace.” A form of way making, the trace offers itself as an object, subject, and action, as both a remnant and a becoming. Haunting similarly defies legibility in that it occupies a discomforting space between something/somebody and nothing/nobody—not simply a vestige of previous realities but an active force that unsettles life-and-death worlds. As a journal of visual studies, Refract is drawn to the power dynamics inherent in the zone between the visible and the invisible: a zone that the haunting and the trace both inhabit. This introduction does not seek to define hauntings and traces per se, but hopes instead to offer spaces for their forms to emerge. One starting point is the tension between absence and presence instantiated by the terms haunting and the trace. 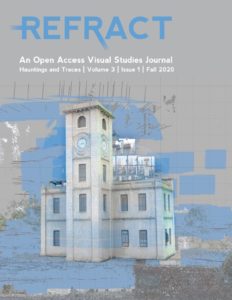 About Refract Journal
Refract is an online, open-access journal founded and operated by graduate students at UC Santa Cruz and dedicated to conversations about visual culture, non-canonical methodologies, and divergent histories. Refract publishes early-career and established scholars, students, and artists, in the genres of the academic essay, critical review, creative work, and experimental artist statement/essays with a focuswork that employs visuality as a lens to engage geographies and histories that diverge from U.S. political and academic empire, and uses the tools and methods of visual studies and artistic practice in pursuit of equity and justice. Refract includes contributions across multiple academic fields, expansive considerations of artistic practice/s, and multiple ways of knowing. Refract seeks works that theorize, dream, and imagine as intervention, as well as pieces that challenge the author’s, artist’s, and editorial board’s intellectual commitments as they reflect on the visual as a site of encounter, entanglement, and social change.